Bruce Springsteen is a new Jersey-born American singer and songwriter on September 23, 1949. He is recognized for his work with the band The E Street Band and considered one of the best artists of all time, according to the famous magazine Rolling Stones. In terms of sales, some of his records in the United States have only been surpassed by music veterans like the Beatles and Jay-Z.

Bruce Springsteen began his career at the end of the years 60, playing with various groups such as Steel Mill and Dr. Zoom & Sonic Boom. The Boss, is as they often call it because of their ability to charge for their first touches in bars in new Jersey and spread the profit among the members of the band. He has dedicated his entire life to the rock, Rock n ‘ Roll, Heartland Rock and, in some cases, Folk genre.

Bruce Springsteen was raised by his parents, Douglas Springsteen, a Dutch-and Irish-descent bus driver, and Adele Ann Zirilli, a descendant secretary of the Italian family. They were a Catholic family group, so Bruce attended the “St. Rose of Lima” school in Freehold Borough.

However, Springsteen’s rebellious temperament had him transferred to the Freehold Regional public secondary school, where his character did not change much, this brought him a series of consequences, including missing his graduation. However, the inspiration to become a musician came later, when he saw Elvis Presley on the TV show “The Ed Sullivan Show.”

This motivated the child to buy his first guitar, an achievement he achieved at the age of 13. Later, his mother got a loan and gave him a new instrument named Kent, whose price was $60 dollars, this fact was an inspiration for the song titled “The Wish”.

In the mid-1960, Springsteen became the guitarist of the Castiles group, where he would later become the lead vocalist. With this band he came to record two songs in a public studio in new Jersey. Later, the Boss played for a short time in a musical trio called Earth, with them he toured the clubs of his hometown.

Between 1969 and 1971, Bruce Springsteen played in conjunction with guitarist Steven Van Zandt, drummer Vini Lopez, organist Danny Federici and bassist Vinnie Roslin in a band called Child, but was later renamed with the addition of guitarist Robbin Thompson and he ended up calling himself, Steel Mill.

During his participation in Steel Mill, Springsteen offered concerts in clubs in Asbury Park, a city where he became famous and got a large number of fans. It was then that the San Francisco Examiner’s musical critic, Philip Eldwood, pointed to the Boss as “a very impressive composer.” 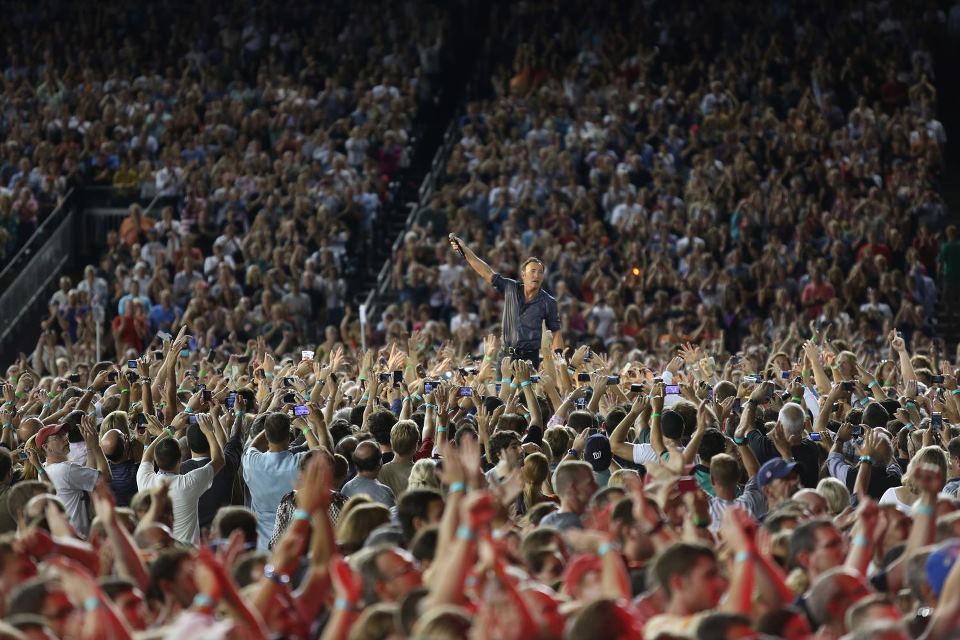 With the addition of pianist David Sancious to the band Steel Mill, began to form the nucleus that later became the E Street band, as well as occasional contributions from a section of winds, a female chorus and Southside Jhonny Lyon in the harmonica. Due to local fame, letters and compositions, Bruce managed to draw the attention of several people who would change his life and musical career in a radical way.

At that time, Mike Appel and Jim Cretecos became the representatives of Bruce Springsteen, in conjunction with Columbia Records producer John Hammond, who had previously invited the talent to an audition in May 1972.

In the audition at the Gaslight, a local located in Greenwich Village, 22-year-old Bruce Springsteen, was aware that his future was played in the music industry auditioning for John Hammond. Despite the pressure he had, managed to succeed and marvel at everyone present, the producer was shocked and claimed that his impact was greater than with Bob Dylan.

The debut album of Bruce Springsteen, entitled Greetings for Asbury Park N.J., was published in January 1973 and did not have great sales, but important critics because of its lyrical influence and music oriented Folk Rock. Thanks to this album, not only Hammond compared it with Bob Dylan, influential magazines also began to do so, which made him gain fame little by little among the fans of the genre nationwide.

In September of that same year, Springsteen launched his second album, “The Wild, the Innocent & the E Street Shuffle”, this was praised by critics but, lacked large sales at the commercial level. The Boss, in conjunction with the E Street Band, began to adapt to the musical genres R&B and Folk.

Bruce Springsteen, The E Street Band and “Born to Run”

His third album, Baptized Born to Run, had great delays due to an artistic “blockade”, Springsteen described it as “sounds in his head”, which failed to explain to the rest of the musicians in the recording room. Despite this, after 14 months he managed to launch the album, thanks to the help and incorporation of Steve Van Zandta to the e Street Band.

From the launch of “Born to Run”, Bruce Springsteen started a series of concerts at the Bottom Line Club in New York. These concerts attracted the attention of the public, at that time the Boss achieved the commercial success he had sought in partnership with Columbia Records. Also, due to the massive reproduction of several singles of the disc in North American radio chains, Springsteen appeared on covers of magazines like Times and Newsweek during 1975.

In the promotional tour of Born to Run, along with the E Street Band, by the United States, Springsteen unveiled a “dark” facet through new singles that were appearing during the concerts, all this was related to legal problems that I was going through Mike Appel.

After two years away from the studios, Bruce Springsteen returned to his regular recording sessions and gave life to darkness on the Edge of Town, an album that, musically speaking, was more mature and overlapped the reflections made by the Boss in relation to people who And they lived and died to fulfill “the American Dream”.

Bruce Springsteen continued to write songs about working life as a main theme and premiered in 1980 the double album titled The River, there included one of his great hits “Hungry Heart”.  The sales were unbeatable, this motivated him to make a promotional tour around Europe.

In 1982, the Boss published “Nebraska”, with a repertoire completely dedicated to social denunciation in his native country. Unlike his previous work, this was completely acoustic and recorded by Bruce Springsteen himself in a room of his residence. The artist went through a time of depression, whose result was artistically different from what he had produced before, achieving position as the album of the year according to Rolling Stone magazine.

In the mid-years 80 Springsteen reached the status of international star, simultaneously positioned himself as an idol of popular culture in the United States, thanks to his record titled Born in the U.S.A. (1984), an album that sold more than 15 million copies in Everybody. The main song, which gives the name to the production, deals with the mistreatments to which the veterans of the Vietnam War were subjected (some were close friends of the artist).

In 1985 he married Julianne Philips, whom he met during the Born in the U.S. promotional tour, his marriage ended three years later, a fact that gave rise to his album of 1987 Tunnel of Love. It is a record production entirely dedicated to relationships, from the point of view of Bruce Springsteen, and where the E Street Band ignores.

However, in some songs of this record production, the artist plays in conjunction with members of the band. Then, in the fall of 1989, the Boss dissolved the group the E Street Band and moved with Patti Scialfa (the E Street Band showgirl) to California.

Later, Springsteen married Scialfa, with which he created three children named Evan, Jessica and Sam. The singer sought to transmit the experience of living with family and published two albums together, these were: “Human Touch” and “Lucky Town”. Both harshly criticized by the audience that was still visibly disgusted by the dissolution of the E Street Band, these albums had no success compared to their previous works.

A year later, he returned to success after winning an Oscar thanks to his single, “Streets of Philadelphia”, included in the soundtrack of the film Philadelphia directed by Jonathan Demme. This allowed him to regain prestige, questioned due to the failure of his previous two discs.

In 1995, the Boss recorded his second acoustic album titled The Ghost of Tom Joad, inspired by John Steinbeck’s novel “The Grapes of Wrath”, this production awarded him a Grammy Award for Best Contemporary Folk album. On the other hand, the audience had a different opinion and this album was worse received than “Nebraska”, due to its political standards and its minimal melody in the songs.

In 1999 the Bruce Springsteen meeting was made official with his old colleagues the E Street Band. In this framework of ideas, they toured most of the Globe and culminated in 10 concerts at Madison Square Garden in New York. As expected, the tickets were exhausted.

As a curious fact, for that moment a controversy arose around his song titled “American Skin (41 Shots)”, written after the death of the young Afro-descendant, Amadou Diallo, at the hands of the New York police.

Already in the new millennium, precisely in the year 2002, Springsteen re-recorded with the band a studio album called The Rising, after 18 years. The album contained a reflection on the attacks of September 9, 2001, as a result was successful in both sales and criticism and became the most sold album in his last 15 years of musical career.

It should be noted that Bruce Springsteen had telephone conversations with relatives of some of those killed by the terrorist attacks, which generated a great inspiration to compose many of the songs of the Rising, although most of the pieces They were developed before the terrorist attacks.

Recent years to the present day

In 2004, Bruce Springsteen participated in the Vote for Change tour with the E Street Band and other recognized musicians. The concerts were scheduled in some states to benefit the Democratic Party candidate, John Kerry, who used Springsteen’s song “No Surrender” as the main theme of his election campaign.

In his next solo album, “Devils & Dust,” Bruce Springsteen returns to his acoustic style, although he included more instrumentation. Unlike his other acoustic works, he had a resounding success in several countries, positioning himself in the first place in sales.

After the death of Danny Federici in 2008, Springsteen wrote the song “Working on a Dream” and gave rise to make the album titled with the same name, published on January 27, 2009. The tour of this album was completely dedicated to Danny and brought together the E Street Band between April and November 2009.

In 2011 died the saxophonist of the band, Clarence Clemons, and again Bruce rewrites to honor the memory of a friend, the album called Wrecking Ball was released in March 2012. The disc reached the first place in several countries, at the same time it won the title of Best Album 2012, given by the magazine Rolling Stones. He also won three Grammy awards: Best Song, Best Album and Best Rock Performance.