Gwendal is a celtic music band from the French Brittany, whose roots are rooted in Celtic lands. Since its creation in the year 1972, the group composes the essentials of its themes by inserting the influences of rock, jazz, folk and classical music that come from each one of its components. The compositions and arrangements are therefore a collective work.

Gwendal has a methodology for shaping and shaping the songs until they reach the splendor. Once composed, the themes are interpreted on the stage, and with the dynamics of the concerts evolve in contact with the public. All of this happens before we go through the recording studio. Hence the freshness and maturity of their discs. This spontaneity is very much in line with the spirit of the group.

Gwendal began with the tours, the festivals, the great theatres, the smaller ones, and then the foreigner: Italy, Germany, Denmark… and especially Spain and the passionate relationship that is established between its public and Gwendal.

With Spain especially, the group has a privileged history and relationship, translating into complicity with its youth, and a fidelity of the public defying the development of time.

The beginning of this long history is located in 1975,. The Basque singer Imanol, a great friend of the group, chooses GWENDAL to perform at the beginning of his concerts. For the youth of that time, these concerts represented the arrival of an extraordinary space of expression. The encounter between a popular instrumental music that mixes tradition and rhythmic rock, and an avid audience of concerts-festive events, achieves an immediate success. The group then begins to traverse the roads of the Basque Country, then Asturias, Galicia…

The signing of a contract with CBS in 1978 will allow the broadcast of the discs throughout Spain, and the tours lead to the group of Madrid to Barcelona, then in the south and very quickly in the whole of Spain.

Gwendal of this time dates the recognition by the press and its public as a group “mythical”, associated with the cultural revival and the appearance of enthusiasm for the Celtic music, not only of the public, but also of many musical groups of different regions of Spain.

After these intense years, the imperative need for a recapitulation came. His fifth album, which they recorded live in Madrid, was the “happy ending” of a period.

With the change of some musicians the creation is individualized and the arrangements are made with more elaboration. This is what affects the music of the sixth and seventh album. Finally the creation is polarized around two figures, Youenn le Berre and Robert le Gall. As a result of this period of reflection and maturation is published “Glen River”, disco that will receive the prize of the Academie Charles Crosen in 1990.

During these years they have performed more than 1,000 concerts in countries around the world. They have performed in countless festivals, for example, Tabarra (Tunisia), Recklinghausen (Germany), Lucca (Italy), Nyon (Switzerland), Festival of Humanity (France) and more recently in Den Bergen, in the interceltic of Lorient, Roskilde… Some of the countries that have visited on tour are France, Italy, Ireland, Belgium, Switzerland, Holland, Germany, Denmark, Portugal and Spain.

During these years of career Gwendal have edited thirteen discs:

In 2017/18 he presents his new live CD/DVD “Gwendal Line in Getxo on the occasion of the celebration of his 45 years on the scenarios. 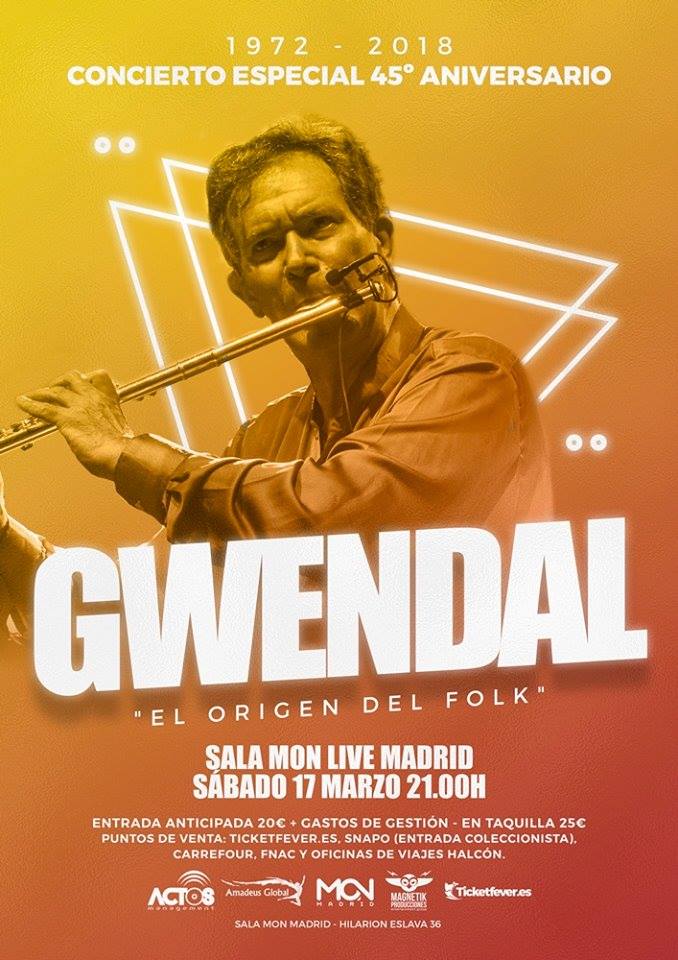