Bust Folk is an interceltic festival that was born in 2002 and that this 2018 reaches its 17th edition. Bustofolk means rediscovering and reviving the music, dance, history and craftsmanship of the Celtic culture. disseminating and bringing to the attention of the general public, in the urban frame of Busto Arsizio, in the heart of the province of Varese, the best artistic offer of the international and traditional local panorama. Bustofolk is music. Dance. Culture. Sports. Art. Traditions. Crafts. Passion. Quality. Professionalism. Volunteer.

In September, the city of Busto Arsizio has been hosting from 2000 the various editions of the Bustofolk, the international Festival promoted by the Irish Dance Academy – Gens d ‘ YS. In fifteen years many and great national and international artists of the Panorama folk have gone through the magical scene of the folk bust. More than 400 exhibitors, about 800 students from higher schools participating in dance workshops, 150,000 attendees.

Music, dance, youth, culture, craftsmanship, quality and professionalism are some of the ingredients of the Festival. The main objective of the Festival is, in short, to rediscover and revive the music, dance, history and craftsmanship of the Irish, Breton and Scottish tradition, spreading and bringing to the attention of the general public, in the urban frame of Busto Arsizio, in Heart of the province of Varese, the best artistic offer of the traditional “Celtic” landscape.

The experience and the passion represent to date the keys that assure a palimpsest that puts in Agenda events for all the tastes and all the ages, thanks also to the patronage of the Irish Embassy, and the moral and economic contribution of the City of bust Arsizio, without which, Bustofolk would not be the same. 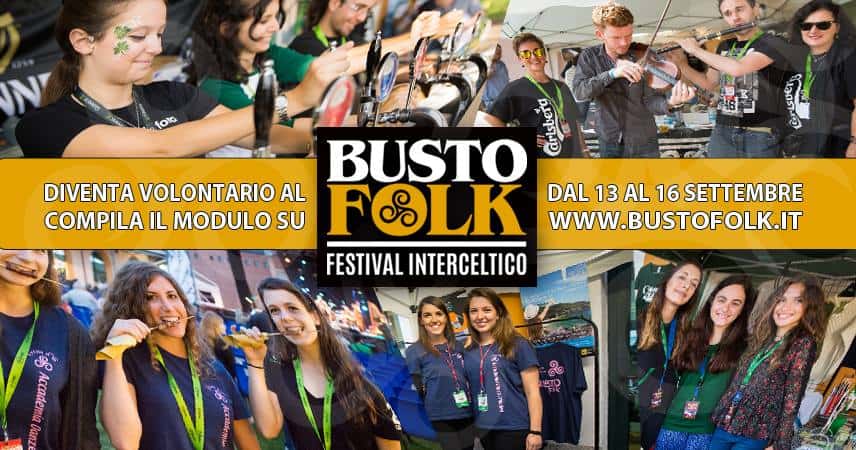 From 13th to 16th September

This year, the inter-Celtic Festival in Busto Arsizio, four consecutive days of music, dances, culture, art, theatre, sports and animation. Four days that immerse us in the magical and fascinating European traditions.

For the occasion Umberto Crespi, president of the Academy of Irish Dances Gens d ‘, which organizes from 2000 Bustofolk, selected the best artistic and cultural palimpsest in the panorama of the “Celtic” music Irish and Scottish but with an eye on to the Song in Lombard language interpreted by the professional bands and students of the schools of Busto Arsizio.

Many national and international artists will stop in September in the city of Busto Arsizio, which once again has a fundamental role for the existence of the Festival, since it welcomes, defends and actively supports this event of topicality well Artistic and cultural established.

Thanks also to the valuable contribution of Regione Lombardia and thanks to the patronage of the Irish Embassy in Italy, the National Tourism Authority of Ireland, and the Breton office of Tourisme, Gens d ‘ YS has been working for 25 years to offer the great Public quality, services and professionalism.

Also confirmed this year will be the restaurant “on the Road ” to allow everyone to enjoy the many culinary specialties that will be served by mobile trucks. We have also reached the fourth edition of the “Literary contest ” and the “Body painting Contest” that this year will have as a theme “the Forest “-One of the sacred places of our ancestors.

We are waiting for you, for a moment of celebration between dance, shows, music, meetings and fun for everyone.