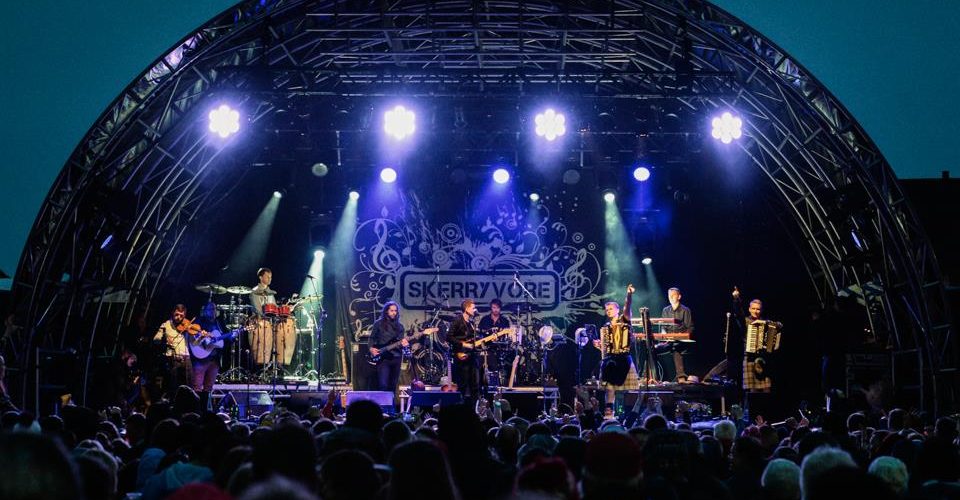 Skerryvore is a Scottish Celtic rock group formed in Tiree, Argyll and Bute in 2004.

Twice winners of Scotland’s Traditional Music ‘Live Act of the Year’ Award (2016 & 2011), Skerryvore have been on a meteoric journey that has taken them from the remote Isle of Tiree on to International tours that have included performances in Central Park NYC, The Ryder Cup Louisville and the Shanghai Expo, China.

Skerryvore kicked off 2018, with an astounding performance in front of 12K revelers at Inverness Hogmanay celebrations. The year was yet another whirlwind of live events, but also interspersed with preparatory work for EVO, their latest album, due for release on June 11th.

The 2015, their Decade World Tour was launched with a sell-out 6000 capacity concert at Mossfield Stadium, Oban and then took in Holland, Germany, Switzerland, Italy, Denmark and USA, as well as UK gigs stretching from Shetland to the South of England. Skerryvore returned to USA in August 2016 for a 7-week, coast to coast tour, their longest yet. Then in 2017, they signed with US agents SRO and enjoyed 2 US tours – a festivals tour and a theatres tour – and by Easter had already completed two of multiple transatlantic trips in 2018.

All members bring their own musical style to the Skerryvore mix. The more they have experimented with this mix, the more the band and their signature sound has evolved. This is evident in the progression across the 6 albums released since 2005.

Their latest 11 track album, EVO is a mix of songs and tunes that typically migrate from ‘big blast’ numbers to heartfelt, reflective tracks. It includes the previously released single “Live Forever” and their latest release, “Take My Hand.” A video for “Take My Hand” was release in 2018.

Following on from the sell-out success of their 2015 Decade event, Skerryvore’s “Oban Live” launched as a two-day event in May 2016 and is now fully established on the Scottish Music Festivals calendar.

A world beating fusion, which takes pride in their heritage and above all else is a pure joy to listen to.” – Folk Radio UK